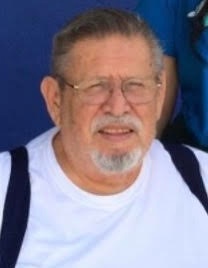 Mr. Lozano was born in San Antonio, Texas, in 1942. His parents were owners of the Running Café (Pacifico) in Hebbronville, Texas, until they relocated to Laredo, Texas and established the Benny's Burger Restaurant. Mr. Lozano attended Martin High School and graduated in 1961. He then enlisted in the United States Army to serve his country. Upon completion, coming from a business family he opened A&M Appliance Service Center on Market Street where he fully operated until his retirement in 2004. He was very talented and devoted his time to spend with his pride and joys, his 2 granddaughters that fulfilled him. Mr. Lozano loved children; therefore he became an educator (aid) where he taught for UISD. Once he stepped down he devoted his time to do wood work where he was recognized at Blessed Sacrament with his Nativity. That was his special talent; he had a passion and the discipline for that art. He paid attention to detail and was very good at it. The Nativity was displayed every year during the Christmas Holidays.

Mr. Lozano was a loving grandfather, uncle, brother, friend, and father to his only son Meme (Gordo). He had the ability to create harmony with many friends and a contagious personality that couldn’t be avoided. He will be dearly missed by everyone who knew him.

“You leave emptiness in our Hearts Arturo; it will take a lot to fill your shoes. Forever In Our Hearts!”

Funeral services will be on Friday, January 28, 2022, from the funeral home to San Agustin Catholic Cathedral where a funeral mass will be celebrated at 10:00 a.m. Funeral home opens at 7:00 a.m. and departs at 9:30 a.m.

Military Honors will be conducted by Laredo Veterans Honor Guard.

To order memorial trees or send flowers to the family in memory of Arturo M. Lozano, please visit our flower store.